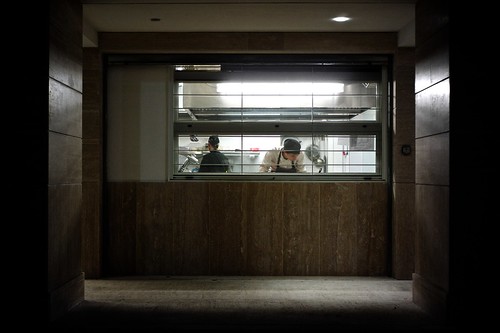 Twenty days yet to go.
American Buffalo premiere, today, at Cometa Off, Testaccio, Rome. The show is fantastic. The three actors, Mario Sgueglia, Gianluca Soli e Alessandro Procoli, gave literally life to their characters, Teach, Bob and Don. The pace is perfect, the set designed to convey the squalor of the claustrophobic junk shop, and the lights, always very natural, change from soft to harsh along with the mood of the piece. The shots from “American Buffalo – The Photographic Prequel” work wonderfully in both presenting the characters and their world to the audience before the show, and in giving a face to the “shadow-characters” which are so part of the piece without ever appearing in it. I’m really glad and honored to have been part of this project. All this said, the daily pic isn’t from the show.
And it isn’t for a very simple reason: Mario didn’t want me to spoil the show for myself by getting there earlier and shooting the rehearsal. He asked me to be there tonight “just” to enjoy the premiere, and then he offered me any afternoon of this week to take the pics. I have to say he was perfectly right, I did enjoy a lot the play, and now I know which moments I want to capture, and which lights I want to use. It’s a win win situation, the kind I like best.
When we left home for the theatre Claudia noticed that the courtyard of our apartment building had been finally opened. Till yesterday there were fences cutting through the whole (quite big) place to prevent people from stepping in it, but tonight the fences were all gone and the place was open, wide, and desert. I immediately took a few steps in it, turned around, and shot the photo I had been waiting to shoot since the new restaurant Osteria Pistoia opened in our same building. That is, getting a snap of the cooks working in the kitchen of the place, which has it window facing the courtyard. Due to the fences I couldn’t get far enough to frame the window between the two columns, but with the fences gone the framing was finally possible.
Two steps on the left or on the right and you would see the main doors that open in the halls of the apartment building. We finally have a courtyard, and this weird window opens right into it. I love it.