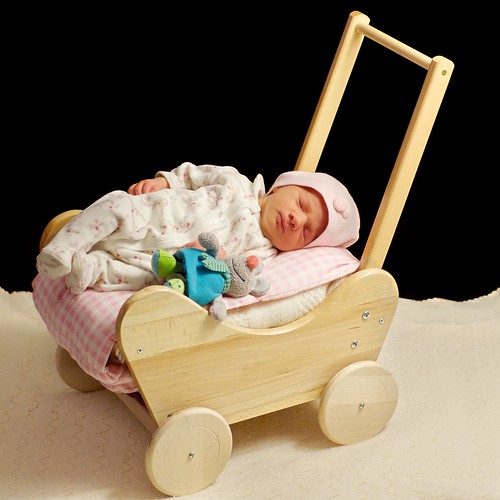 It was just ten days ago that this little girl eventually decided to get out of the warm and comfortable womb of her mother and meet the rest of the world. Fact is, that womb happened to my sister-in-law’s, so this brand-new baby is another piece of family to me, my second niece, and Agata’s second cousin. I was leaving for Brussel when she came into the world, so I didn’t have a chance to visit her (and her mother Francesca) at the clinic. When I returned to Rome they were moving back home, and needed a few days to settle down before accepting visits. Bottom line, I finally met my niece Ada today, she’s ten days old, she’s very quiet and amazingly small.
The daily shot could have been nothing but her portrait, it has been kind of a tradition in this project that whenever I met a newborn I take his or her pic. When shooting newborns, I like to show how freakily small they are. Like what I did with Virginia, when I put her within her grandfather’s bookshelves, or with Diego, which was placed in a basket over a the big barrel out of his parent’s country house.
With Ada we decided to use one of her older sister Lia’s toys, a beautiful and wood carved pram. We removed the dolls from it (which, by the way, are way bigger than Ada), filled it with soft blankets, and put Ada on it for a few shots. Now, the tricky part with this kind of shots is to get a somehow studio-photography look without using a background or strobe lights (which I don’t usually bring along!). We set the “subject” over the dining table, under the table lamp, and opened (just for the time of the shots) the windows behind her. The resulting light fall created the effect of a black background, while light was both powerful and diffuse enough to gently lit Ada, the pram, and the light-yellow blanket we used to cover the table.
So, here is Ada, a quiet, doll-size human being in her very first days of living (in the world). I now know for personal experience how much and how quickly she will change in the next few months, eventually becoming a little person, with her character, her vulnerabilities, and her virtues.