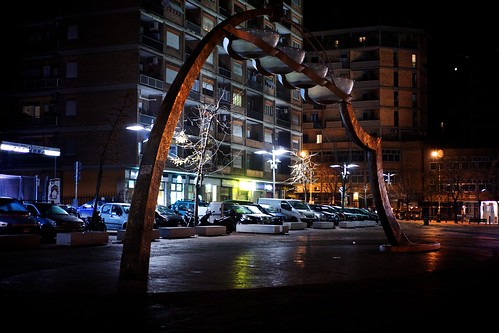 The fountain at Largo Ettore Rolli, just under my flat, is considered by many Romans to be one of the ugliest pieces of modern art our city has been wounded by. Now, it certainly isn’t particularly charming, but I don’t totally dislike it either. Problem is, the ACEA (the company which is in charge of water in Rome) doesn’t keep the fountain running, so the four tanks get filled by rain and subsequently start growing algae and bacterias, and, bottom line, they get full of this disgusting brownish/greenish/reddish water depending on the quality of the scum in them. Second problem is, the square is unmentionably ugly itself. I can’t imagine any possible fountain design which could have matched and made beautiful the huge, desolate, horrible space that Largo Ettore Rolli has become after the renewal. So, Massimo Fagioli, the psychi-artist (cause he’s a psychiatrist which does artistic installations such as this fountain) surely didn’t nail the task, but in his favor we should agree that neither Michelangelo would have performed much better.
Whatever you put in a shit-hole is going to look like shit, I guess…
OK, to tomorrow I’m going to fly to Brussel and then on Wednesday I’ll drive (or be driven, depending on my boss’ attitude) to Enschede, The Netherlands, for a quarterly meeting plus review meeting of the European project I’m still involved in. I’ll be out till Saturday, I’m leaving with the NEX-7, the color-skopar and the laptop, so I’ll be able to shoot, post-produce and publish the daily photos and their stories, I just won’t be online as much as I usually am.