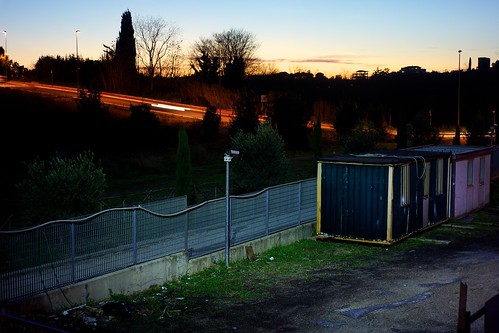 This is the view from my office. This is sunset over zombie-land. It was day thirty of the project when I firstly introduced the concept, with another view of the area around my office: “The outskirts of the city look all the same, regardless being poor as much as rich neighborhoods, they are always immersed in large ambiguous and abandoned areas full of junks. It’s the Nowhere which surrounds the city and it is actually wider in surface than the city itself. At dusk the Nowhere looks like made of many small clusters of normal human life surrounded by great amounts of zombie-land.” As you see, nothing has changed, here around. But there is a very big difference, that being me resigning from my office job. Thirty days ago I had a speech with my boss, followed by an official written communication. I resigned. That’s it. I left what was a permanent position in a big private scientific center. I did it even with an unemployed wife and a baby daughter. Whenever I make a list like this I feel terrible… However I did it to finally have the time and energy to pursue my dreams. And life goals. Many of which are strictly related with me being a professional photographer. And Claudia supports me in this adventure. Crazy me, happy me! So, is this the last sunset I’ll see over zombie-land? Unfortunately no. My other boss offered me to get a “project position”, that is, to keep one of the many projects I was following for the company and to work on it as a freelance. I will still have much more time to devote to my passions, but I’ll also keep a little salary. In a time of economic crisis such as ours I didn’t feel like declining the offer. So, for a large step forward towards my freedom which I found the guts to make, I shortly after fell for a little step back. Everyone keeps telling me it was the right thing to do, also Claudia, so I guess it’s OK. Bottom line, I’m so excited for this 2013 to come, it’s already starting with a big life change, and I’m sure many other will follow, I just hope the happy ones will be the most.