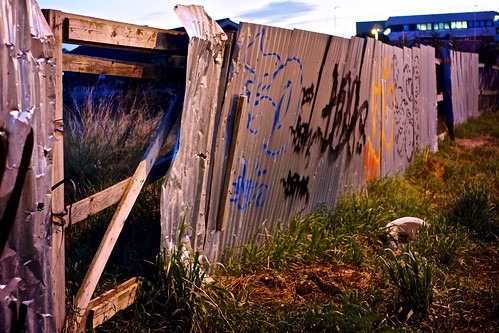 Spring is coming and days are getting longer. Now when I leave the office the sky is not pitch black, but rather dusk-blue. And dusk is good, especially when you have a tripod or a fast prime and good ISO1600 performance. But dusk lasts shortly, at least in Rome. Hence, when I left my working place today I had a photo-walk around it before night came by.
It is always surprising how much the world changes when you are looking for shots. It is a much more demanding and tiring way of looking at things, off course, but it’s like finally having your eyes wide open. Especially when you do it in a familiar place, one of those places you are used to cross by as quick as possible in your way to/from work.
This is where I park the car. The big building on the background is where I work. It’s a very new, very shiny, very modern, and very nice building. But it’s at the outskirt of the city, as most of the research centers in Rome. And the outskirts look all the same, regardless being poor as much as rich neighborhood, they are always immersed in large ambiguous and abandoned areas full of junks. It’s the Nowhere which surrounds the city and it is actually wider in surface than the city itself. At dusk the Nowhere looks like made of many small clusters of normal human life surrounded by great amounts of zombie-land.