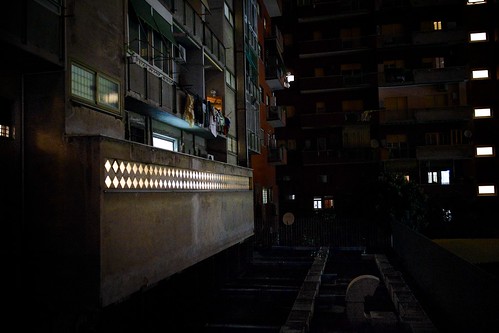 This neighbourhood is like a giant and compact organism. Sometimes to get to some of the most hidden streets I had to walk inside buildings and get to their back doors. I found out they open onto other streets which bring to other buildings which, when I get to walk inside them, open to other smaller streets. Like an urban matryoshka. This organism doesn’t normally let me to look at its structure, only at its “facades”, like they were the walls of a immense circulatory system.
However, from time to time, I find cracks in the structure from which I can get a vantage point. For example a road work for a new parking lot which gets deeply inside a couple of walls and lets me take a peek at the inside. Which, again, is giant and compact. There’s no unexpected exit in sight. Only walls, windows and darkness, the kind which require the sensor of the RX-1 to be captured without a tripod.