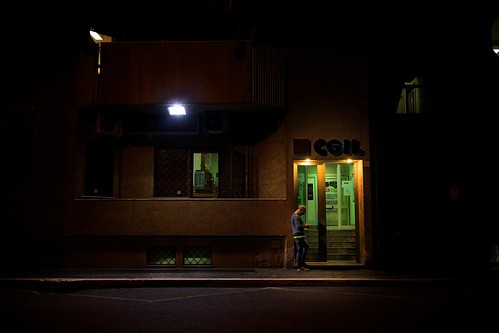 Night walking alone is weird. For sure.
As far as I walk straight, I probably raise less interest than when I was walking out the dog. Because there’s no dog. Especially, there’s no beautiful shiny white with deep dark spots and big sweet eyes dalmatian dog. The kind of dog that would have been immediately noticed by those who love dogs. And also by those who fear them, for the simple reason they fear any kind of dog. Instead, as far as I walk straight, nobody notices me. I’m no one with no dog.
But if I stop, or worse if I walk back, then I raise interest. I wish I’d know how to walk straight, stop, or walk back being invisible, but I have no clue.
So when I spotted this guy texting in front of this building I didn’t know what to do. At first I tried to shoot while walking. Like secretly pressing the shutter while the camera was hanging from my shoulder. As you may imagine the result was just wrong: wrong focusing, wrong composition, and inevitably blurry.
Then I had to walk back, and the guy noticed me. Instead of panicking I did what he was doing, I grabbed my phone and started swiping my fingers on it. Like I was texting or whatever. This worked, the guy went back to what he was doing and I started planning how to eventually bring the camera to my eye and attempt a proper shot.
But then a taxi stopped exactly in front of the building. Empty, hence: waiting. As any taxi driver waiting for his ride he started staring at me and at the other guy, trying to figure out who’d called him. Then the janitor of the opposite building, the one I was in front of, walked out, curious to see who called the taxi (?). Noone did, as it got clear in the next five, never ending minutes. I kept playing with the phone and looking around like I was waiting for someone to arrive or to an address to walk to.
Finally a woman got out of the building, jumped inside the car, I raised the camera aiming at the guy, and by the time the taxi was out of the frame the guy was totally ignoring me and lost in his texting, and I could take my ninja shot.