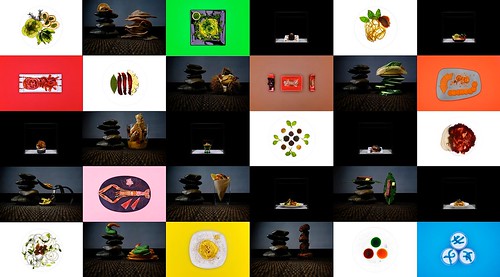 “Transformation”, “Colors”, “Translucencies”, and “Equilibria” menus are here represented in a mosaic to highlight the graphic nature of the photographs.
I want to thank the Chef Lorenzo Mazzoni for the hard and incredible work he did in presenting thirty different recipes divided in four coherent menus. We had a lot of fun together, but I think I’m the one who enjoyed this project most since I had a chance to attempt for the first time some food photography, and I did it with an excellent chef who puts a lot of effort not only in cooking but also in presenting his recipes. Plus I had the privilege to eat all the food I got to shot, and I loved each and every recipe: they don’t just look great, they are all tasty and delicious.
So, here we are, closing the ninth theme of this project/blog and ready for starting a new, different one tomorrow already…