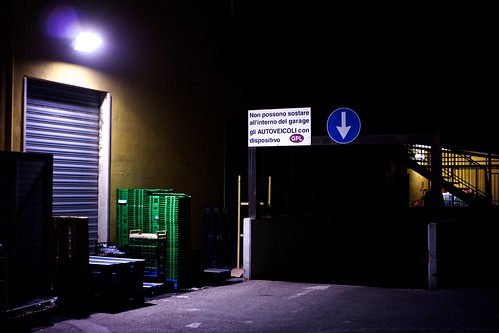 Evenings are getting cold, but not enough to stop me from doing barbecues if I have guests for dinner. I love barbecues for a lot of reasons: they are quick to arrange, do not require me to cook the food in advance, they are highly social, and when the meat is good and properly grilled it’s a meal difficult to beat. Also, a barbecue is the best way to enjoy the roof terrace.
So, when I came back home from work I already knew what I wanted to prepare for the couple of friends coming to join us for dinner. I walked down the street to the supermarket, where I bout a huge amount of good meat and I took this shot of the backdoor and garage entry, the dark side of the shiny market.
The guy is the older brother of my former boss (and now one of my best friends) when I worked at ESA, in the Netherlands. Alessandro, this is the name of the guy, used to work in Luxembourg, but has been recently relocated to Rome. He’s originally from Rome, so he’s very happy to have the opportunity to bring his family to live in his city, even if for just a few years, before going back to Luxemburg or being relocated somewhere else.
We spoke quite a lot about the political, economical, and the social situation in which our country is currently engulfed. He’s just moved to Italy and knows that eventually he’ll be back out of it, so he manages to observe the situation in quite a detached and serene way. I remember having the same approach when we came back from the Netherlands, in 2008.
I too thought that I wasn’t going to be here for good, the idea was basically to get the PhD and then to leave again for a Post Doc position somewhere else. At that time Spain was one of the hottest destinations, the crisis hadn’t stroke hard yet and there was a lot of work in the Universities and private research centers. South of France was another option, though Claudia and I would have had to learn French from scratch, a language a bit more difficult to learn than Spanish (for an Italian). We wanted to avoid to get back to a Northern country, such as the Netherlands or UK, or to a far away country, such as U.S.A.
What happened, instead, is that an incredible opportunity to buy a beautiful flat in Rome happened to find us. The house was just on paper, the place didn’t exist yet. But it immediately seemed perfect to us. And when we finally walked into it, we immediately understood that there was no (peaceful) way we were going to leave Rome again. Or, at least, for a good while.
So long serene detachment!