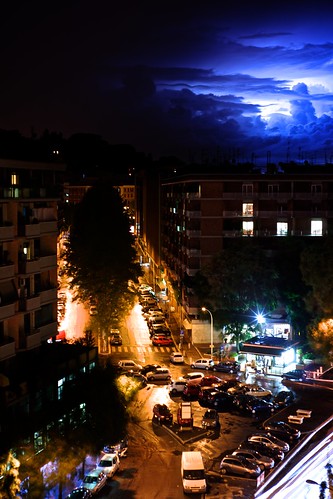 The storm Cleopatra eventually arrived. In the last four days, the weather forecasts and the civil protection scared the shit out of Roman citizens with apocalyptic alerts regarding days and days of uninterrupted heavy rains. At first this biblical flood was supposed to start on Saturday, but it disappointedly rained just a little. Then they said that it would have happened on Sunday, which turned out to be a sunny day. At that point they said that we would have suffered all the rain that didn’t fall in the week-end plus an extra huge amount of rain, for a total of thirty six hours of uninterrupted downpour. On Sunday night they said it would have started early in the morning. Monday morning was as sunny and calm as Sunday was. So they said that the terrible storm would have started at noon. I enjoyed my lunch on the sunny terrace, while listening to the radio alerting that the apocalypse had been delayed but to not get out of home since by the end of the afternoon the whole sky would have fallen down, drowning the whole city. By 6.00PM I was driving back home while the radio was reassuring Roman citizens that the Armageddon was now planned for 8PM, so to go home and give the last kiss to families.
Eventually, the evening arrived and, with it, the sky went pitch black. Then a strong and hot wind started blowing as hell. Tens of strokes of lightning illuminated the clouds, revealing the terrifying show of a huge storm approaching. There were so many strokes, that with a shutter speed of ten seconds I couldn’t miss them. A few seconds after this shot, the wind got suddenly filled with rain and me, the camera and the tripod were washed out.
But after ten or twenty minutes, everything was fine again. Sure, the sky stayed pitch black for the night, some more strokes maybe, but the wind was already over and so was the rain. That was the terrible storm we were alerted and scaried for four days in a row. Now, is the weather forecasting such a gullible and basically wrong discipline? Or did the instability of the the weather conditions make them basically unpredictable? Or rather were the Mayor and all his crew worried to be, again, ridiculously unprepared to cope with a normal storm, and so tried to scare us off giving it a name, Cleopatra, and making it sound as much terrifying as possible? After all, how could have we blame them if the city was destroyed by such a mythological monster?