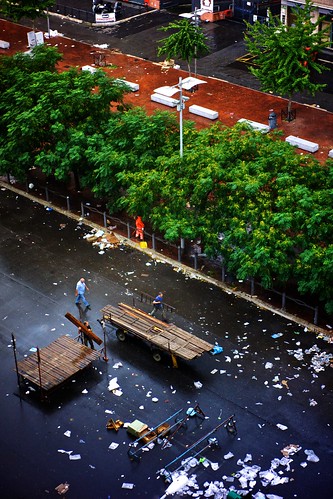 The market of Porta Portese has three distinctive stages: when it gets set up in the night, when it gets invaded by thousands of customers in the morning , and when it gets dismantled in the late afternoon. Of the three stages, the last one has the peculiar beauty of a battlefield. Every Sunday the whole place is reduced to such a mess that it takes more than four hours to the roadsweepers to clean all up. But they eventually do, even under the rain like today, and by the end of the day there are no signs of the huge and insanely crowded market that spread all around.
This morning, at 8AM, I had the usual walk in the market with Claudia and Agata. Since it rained till almost 7AM the place was almost desert, the stallholders putting their goods back out. The atmosphere was unique, but lasted not more than an hour, the time for the tourists and Romans to realize that it wasn’t going to rain again soon, and that the market was still on. By 10AM the roads were so crowded and the stalls so thickly surrounded by customers, that it was difficult to move around with Agata’s pram, and we had to return home.
But then it started pouring with rain again, and this time the crowd vanished way quicker than it firstly appeared, leaving the stalls and their holders to their inevitable fate. I didn’t envy them at all, but yet I quite enjoyed the show of the sloppy disassembling of stalls and cleaning of roads operated by the army of soaked workers beneath my window. A cup of hot tea in one hand and the camera in the other finished in making my afternoon really delightful.