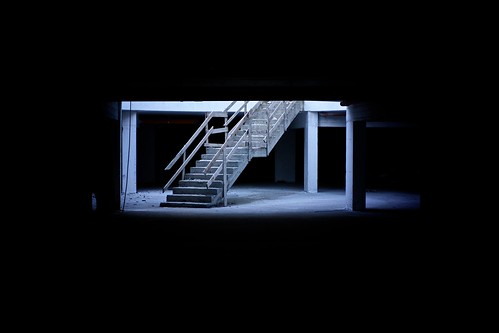 The apartment building we moved in is supposed to have a court. With shops. And gardens. And underground public parking lots. All of this due to the new construction laws in Rome: new flats can be built only if they come with new public services, such as parks, parkings, and other stuff. I think this is a great rule, and that a lot of the problems that afflict our city would have been avoided if it had been active earlier.
Right now, however, there’s nothing. The shops are all closed (I think most of them have not been bought yet). The gardens and the rest of the court are hosting, for the most, the construction site. And the underground public parking lots are under construction. Only the “skeleton” of the place is already there. With its pillars. And a staircase which will connect the lots with the ground-floor court.
I drive by it at least twice a day, since the second underground floor, where we have our private garage, is instead fully active. When I arrived this late evening it was all very quiet. The construction company had left the place for the night, and people where already home, getting ready for their dinner. The sky was still bright of an early sunset, though, and lot of soft and white light was penetrating from the court in the unfinished underground, over the staircase and around its neighboring pillars.