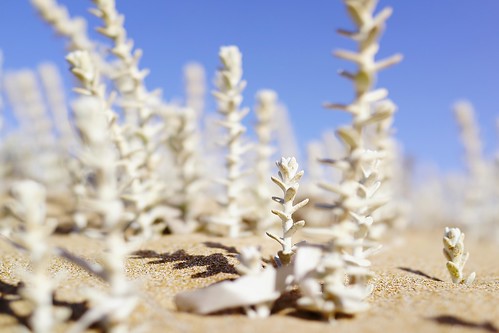 New week, new app. Snapseed demonstrated to be intuitive, fast, and relatively powerful. However, the last two post-productions left me slightly disappointed, so I decided to move forward and test another of the most popular photo-editing apps for iOS: Photogene.
During a walk along the dunes of the camping beach in an extremely windy day I noticed how the vegetation reduces while approaching the shore. Fewer and fewer appeared to be the plants who managed to survive in those harsh conditions, covered as they get by sand and salt. But I was lucky enough to encounter those few and observe how they become spectacular white micro-forests. And the RX1 macro proved to be excellent in capturing the details and the mood.
I did a very little work on the original image: a bit of sharpening and a slight straightening were all I asked Photogene to do. With respect to Snapseed, Photogene needs to “load on the image” the effects produced by most of its tools, so the correct amount of post-production is more a matter of trials and errors than the fine tuning Snapseed allowed me for. On the other hand, Photogene offers way more tools (the professional ones) and less “hypstamatic-style” presetes, the quality of which I’ll try to test in the next days. Also, it offers an integrated flickr upload feature (Snapseed misses) which makes my “On the Go” life slightly easier.