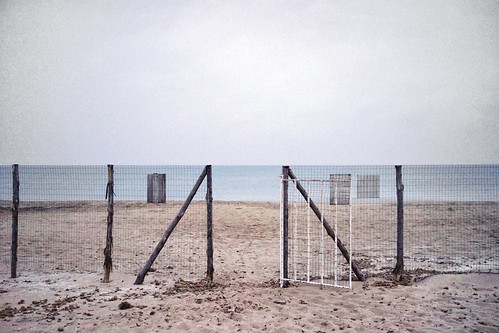 After days of constant traveling we spent the day at the camping, simply resting and enjoying the beach, the sea, and our mutual company. We played some card games, had a few beers, while here and there I would go for a walk, trying to document the camping typical environment. Among the many weird features of this (as of any other) camping, I was particularly intrigued by the long fence separating this place from the shore, and the one and only gate that allows for moving between these two places. The thing is, during summer lots of people used to reach the camping by the beach, avoiding the official entrance and hence staying for free. So, during summer, this gate is controlled and helps to avoid gatecrashing. On the other side, this long fence affects tremendously the landscape of the camping (and the mood of the campers).
Talking about pre and post production, this shot has been taken late at dusk and in the worst conditions for post-processing: ISO6400 (the noisyest I dare to use), F2 (the less sharp), quite underexposed (I couldn’t get anything sharp under 1/60 due to the strong wind), and with sole jpeg compression (due to the current theme!).
I did the postproduction with Snapseed: I used Selective Adjust tool to locally desaturate the sky (where the magenta noise was most visible and annoying), so that the noise would look more like analogue grain; other tools such as Tune Image, Drama, and Details where also applied.