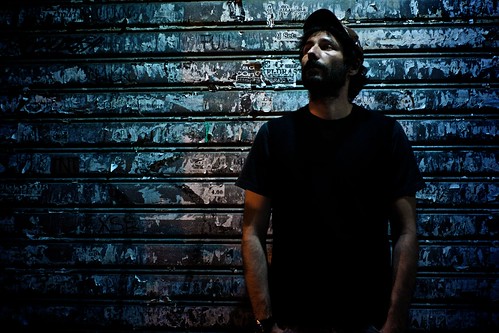 The second quarter of the project starts today. It’ll be a busy time, the photos will probably reflect the transformation that moving into the new house will produce in our life. There will also be other weddings, photo-shoots, and business opportunities.
Filippo, my friend which works in Congo, called me today. He’s in Rome for one week. We’ll try to see each other as much as possible.
Tonight we went to a birthday party. The “birthday girl” is Anastasia, one of Claudia’s closest friends. She’s very, very pregnant of her first child. She’s Nick’s girlfriend, the owner of that nice little place in Pigneto I told you about time ago, Merletti di Bruxelles. In less than two months Nick will be a father. I remember the feeling. It was like being in a Star Trek tele-transport module waiting to be suddenly materialized on some random planet I knew nothing about.
While at the party I went for a walk in the neighborhood, where I found this metal rolling shutter, full of textures and with a nice central light spot. I returned to the place and asked Nick to pose for me. He has this new look with the beard and the hat which I thought would well fit the mood of the stroll.
And here’s the shot.