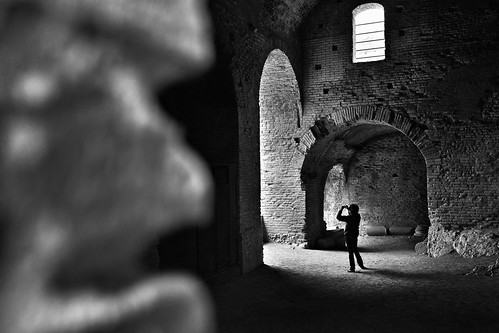 The ancient Roman theatre on the top of Taormina gives the viewer a perfect powerful hint of the immense resources that the Roman Empire could count on, if building a whole, huge theatre so far from Rome and in such a complicated location (steep and rocky hills) could be a practical option.
The town is fantastic even if crazily crowded by tourists from all around the globe (but especially from Germany and Russia, according to the idioms I overheard). Not a place were I would live, but definitely worth visiting.
I took this shot during our visit of the theatre, and the guy portrayed is my friend Michele. I used again Snapseed for the post production. I still have some issues with the image versions, I can save the image at intermediate states so I can go back to them if needed, but I can’t figure out a way to change how a tool I already used affects the image. It seems like every time I “apply” a tool, the software forgets what I’ve done but knows only how the image now looks.
For this shot I applied tools such as Drama, Tune Image (I especially like the “Atmosphere” tool in it), Selective Adjust, and Black and White. Snapseed is definitely a powerful app which allows for both subtle and drastic changes to the image.