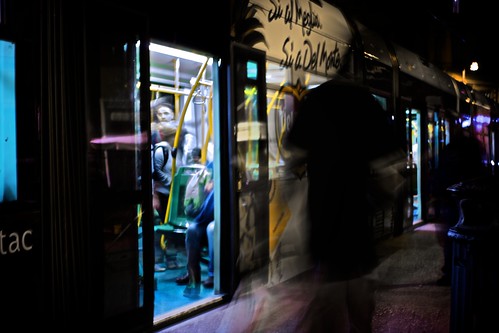 First boxes appeared in the house. And the books disappeared. The moving is approaching.
We had dinner out with a couple of friends. The girl is a close friend of Claudia since the end of university. They have a lot in common and share many values and views, which means that when they meet they immediately start chatting and never, ever, stop. They quickly start recursively inserting new topics into opened ones. It’s like the movie Inception, you have to keep track of the level of depth (of the conversation) you are in, or else you get stuck or loss.
The guy is a very nice person. He’s also a big fan of my work. He also organizes major artistic events in the city. Today I finally feel I have some material which could be considered for some minor event. It’s thanks to the project, which imposed me daily production of quality stuff. I’m getting a portfolio out of it.
I show him some stuff. For example, I made a folder with solely the night city-shots. I really like the effect that they produce when seen all together. He looks at the photographs for quite a long time. Then finally puts the iPad down, stares at me, and eventually speaks: “I’m going to tell you how I feel when I look at some of these shots. I’m probably wrong, but I feel like you put together Hopper and Lynch…”.
I love the guy. Did I mention he’s a really nice person?
Anyway, regarding today’s shot (which in this case is not Lynch at all, let alone Hopper), the place where we had dinner was in the very center of the city, where the tram number eight stops. This tram goes straight to our next house. We’ll be using it quite a lot, I guess.
First boxes appeared in the house. And the books disappeared. The moving is approaching.