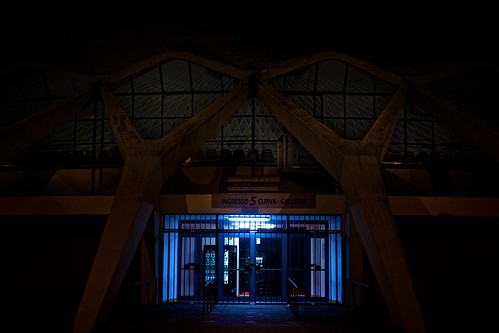 With the house-moving approaching, I am more and more wandering around my memories, trying to see if there are any other places in my neighborhood which were important to me some time in my past and hence deserve to be portrayed. I have the school (checked), the square (checked), the grocery store (checked), the pizza place (checked), the supermarket (checked), my road (checked), the surroundings (checked), the Auditorium (checked), the view from my window (checked), the soccer field (checked). I have them all.
Then I remember something new. A place which didn’t come out with the rest of the memories because it was a part of my life before I started actually living Villaggio Olimpico. That is, before high-school. At that time I was still a kid. A fatty. So my parents were always pushing me to do more physical activity. Sports. Since my childhood, I did swimming, basketball, volleyball, and tennis.
Then, in 1992, I started playing handball. I was good at it, my weight was more a quality than a burden. The year after I moved to a better team, which played in the Central-Italy league, so every weekend there was a game somewhere around. I remember my father driving me and a couple of mates to our matches. It was a great time.
And here comes the new memory about the neighborhood. We hosted the matches in the Palazzetto dello Sport, the second biggest covered stadium in Rome, the same place where the first division of Volleyball was used to play and where now the first division of basketball plays. The stadium is in Villaggio Olimpico, just in front of the Auditorium. My father also used to play in this stadium when he was a professional volleyball player in the sixties. I remember feeling really bounded to him because of that.
In 1994 I hurt my knee badly during the hour of “physical education” at high-school. It took me two months to return to walk, and I couldn’t run for several months after that. I had to leave handball and go back to swimming, which did not stress my knee. I never came back to the stadium, until I almost forgot about it. Till today. And here’s the shot.