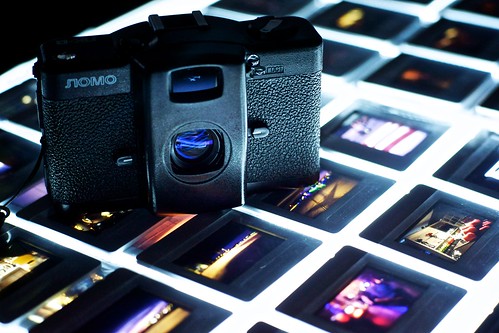 I spent most of the day by “scanning” the slides from my friend Edoardo’s bachelor party. During the three days we spent partying in Bruxelles the last December I shot solely with my soviet LC-A (which is not the new chinese version LC-A+) charged with Fujifilm Sensia 400 slide film.
My “scanning” process is a little different than usual, since I prefer not to use any scanner, but rather to digitally re-shoot each slide, once mounted in its frame, by back-lightining it on a light-table.This way I have complete creative freedom in composing each shot (i.e., including the frame in the image, putting one slide over another so obtaining kind of multiple exposures, ordering several slides in a composition, etc.).