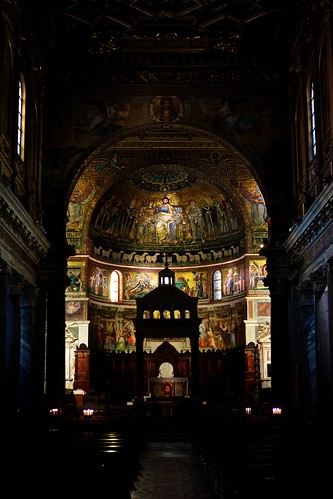 I had meetings all around the city, so most of my day was spent driving. But the last meeting was about photography, and it was really nice. There’s this couple, they’re young, they’re cute, they’re nice people. They’re getting married in a few weeks, and we’re going to shoot the marriage. We met them in the late afternoon, at Santa Maria in Trastevere, one of the most beautiful churches of Rome. As the name may suggest, it is situated in the neighborhood of Trastevere. We visited the church together with the couple to study the lights and to talk about the ceremony. I have the feeling that their wedding will be great and that we’ll take some of our best wedding shots ever.
We continued our meeting with a beer at Ombre Rosse Caffè, my favorite place for a drink in Trastevere. It is relatively close to our next house, so you should expect some shots of the place, sooner or later. In the mean time, if you happen to be in Trastevere (which will be the case as soon as you’ll happen to be in Rome, I guess), you should have a drink there. It offers a nice atmosphere, great music (live in the evening) and excellent drinks.
Tonight there was a band playing American folk rock, and Agata went into ecstasies: it was her first time listening to live music. It is amazing how good music works in a very basic level: not matter what your age or culture is, you hear it, you like it. A few days ago I put “Back in the U.S.S.R.” from the “White Album” of The Beatles. It’s a very catchy, super fast rock and roll, the last song of the genre ever written and played by the band. Agata went crazy, she started weaving hands and feet. She was dancing.