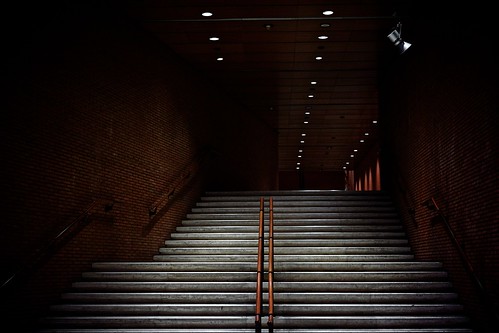 If you are following this blog you might have noticed the frequent presence of low-light shots. I did the math and they seem to account for around half of the project. If you now go on Flickr an have a look at what was in my stream before the project, well, you could get the idea that this low-light thing happened all of a sudden. But it didn’t.
As with almost all of my artistic expressions, the current low-light predilection was initially seeded by a new piece of hardware: the 80s’ weird and famous Soviet, fully automatic, mentally designed, little LC-A film camera. I bought one on Ebay from a Polish dealer at the end of last November, with the intention of shooting slides wherever we would have gone for the bachelor party of Edoardo (about which I wrote the first of April). It was cheap enough to afford its eventual loss, small and light enough to be brought everywhere all the time, and good enough (once loaded with Sensia 400 slides film) to shoot that short trip.
The unique feature of LC-A, however, is in its weird metering system, which doesn’t give any prediction of the shutter speed, but allows for very long exposure (we’re talking about minutes). I was so intrigued by this ability and amused by the capriciousness of the meter, that I started bringing the camera along during the everyday night dog walks. I started shooting gardens, entrance halls of apartment buildings, streets, and motor homes. I started shooting my neighborhood at night, nourishing my eye for low-light scenarios.
I really enjoyed the whole experience. It lasted around ten days, maybe a couple of weeks, during which I shot two or three films. I never published any of the results, though. The LC-A is all but a precise piece of equipment, especially when it comes to focusing, and I felt that the low fidelity was not appropriate with the feeling I was trying to express. Here’s when the NEX-7 came in. To answer the need of a compact and precise digital system good for hunting low-light scenarios. Like these stairs at the Auditorium Parco della Musica, where the sudden light-fall renders an intriguing mysterious mood.