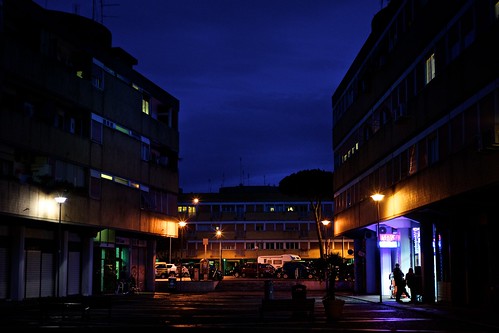 Lazy Saturday, I did some work, played with Agata who started her weaning and had her first pap. I took a video of the event, using the NEX-7 with the Voigtlander 35mm and the Minolta 85mm. If you are interested, you can find it on YouTube.
Then we had a meeting with a nice couple who’s getting married in September. The meeting went pretty well, so we have our chances to get the job. Afterwards it was eight in the afternoon and we were already tired. It sounds weird, at least it does to me, but spending a whole day with Agata can be more fatiguing than a day at the office.
So we headed to the pizza place in Piazza Grecia to have some early and quick dinner. Piazza Grecia is the main, pedestrian square at Villaggio Olimpico. In highschool I used to have pizza slices here. Back then the pizza was pretty awful, but the square was great to hang around with my school friends. Years later, when I moved to my apartment at Villaggio Olimpico, the pizza place changed owner. It is since then run by a family from Salerno, a city close to Naples. They do a great pizza, and they run a great business, their place is always crowded, and their offer is rich of options between pizza, fried stuff, and other specialities from Salerno.
When we arrived at Piazza Grecia it had just stopped raining. Dusk was leading to night, and the sky was just that electric blue which calls for some landscape photography. So, here it is, this is Piazza Grecia at dusk, its bar on the left and the pizza place on the right.