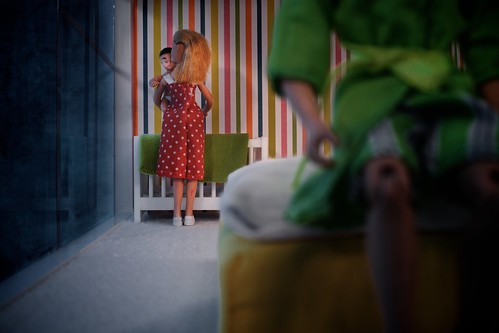 “365 Days of RX1: one camera, one lens, 12 projects” is now at its third monthly theme. Me and the RX1 will stay closed in the studio, this month, cause the “Doll’s House” project will entirely be shot “in” the dolls’ house.
Why’s this thing? Well, yesterday I was at the opening of my first personal exhibition with the works from the series “Momentary Suspended”. The event was a success, around four hundred people visited the gallery that hosted my twenty prints, and only enthusiast comments could be heard.
That said, the most common (competent) interpretation of my work was it to be somewhere between the painter Edward Hopper (for the atmosphere and the “candid” portraits) and the photographer Gregory Crewdson (for the use of lights and colors to tell post-industrial metropolitan stories).
So, I decided to go “more Crewdson” with these theme. Now, the extraordinary American photographer does his work entirely within movie sets, with only artificial lights, and actors to play the “human figures”. I’m obviously very far from having that kind of resources, so I built a mini-movie-set in my studio, and I did it wit a dolls’ house.
While “Momentary Suspended” was composed solely by candid shots (none of the subjects portrayed were aware of the photographing act, and none of the illumination has been added/controlled/modified by any means), “Doll’s House” will try to tell a similar story with a completely artificial setting (even the actors will be “artificial”).
I hope you’ll like this series. I know it is very different from the “Habemus Papam” and not the ideal subject to test the street-performances of the RX1, but I want to test myself with a cinematographic approach to photography, and this seems to me to be the perfect way to start.