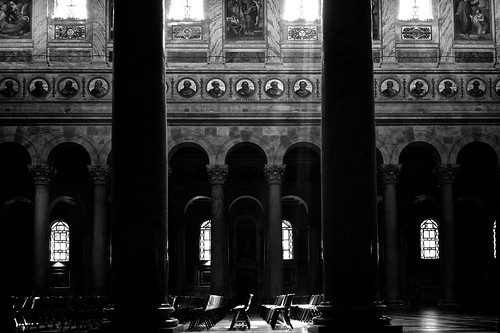 This second month of the 365 Days of RX1 has passed, along with the first month of the pontiff of Pope Francesco. I has been quite an intense time, both for the Catholic church and myself, since I’m not really used to these kind of photographic projects. Until less than two months ago I had an office job which had me staying at my desk 9-18 hrs every day, but now I have the freedom to organize my day and to devote it to photography, and I’m glad I used this freedom to complete this first reportage-street photography attempt.
For the last thirty-one days I’ve been basically hanging around the papal basilicas or attending other Catholic activities. I discovered a “sacred city” within Rome which doesn’t necessarily overlap with the Vatican City. Some Romans think that without the Vatican this city would finally become a normal, secularized, Western-European metropolis. I now doubt that, from what I’ve seen the connection between Rome and the hordes of pilgrims and devoted isn’t necessarily mediated by the Vatican, but it is often rooted in the whole history of this city, in the very events which happened here in the last two thousand years. There’s simply nothing anyone can do to suddenly change this. Rome will always be a sacred city, and even if the secularization process may transform its citizens, it will never affect the city and the tens of thousands of pilgrims which gather here almost on a daily basis.
I’m also glad to the “Habemus Papam” theme for having me attending this potentially crucial moment in the history of the Catholic church, of the Western Europe, and with them of the whole world. While everybody has the right do believe in any (or no) God(s) as they like, none should doubt that religions still play a fundamental role in the world-wide politics. I’ve been trilled by the ability of Jose Bergoglio to dispatch in such a short time so many valuable and revolutionary signs at almost every public event. Sure enough, (most of) the world loves him, and the whole is waiting to see how his sings will translate into renewing actions.
So, one month has passed since we all started this journey, and soon the new Pope’s portrait will be showcasing with the ones of all the other Popes here in the papal basilica of San Paolo Fuori le Mura. Next Sunday Pope Francesco will celebrate the Mass from the papal altar, here in this church. This silence and emptiness will be just a memory, by then, but I won’t be here. I’ll be working on the new theme. For which you have to wait for tomorrow. See you!