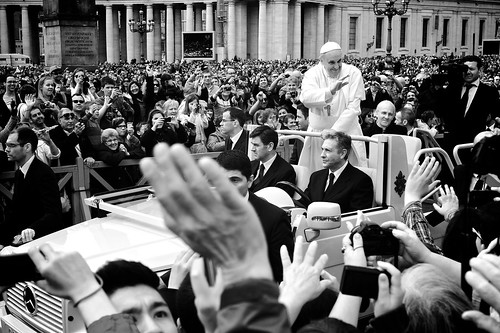 Tens of thousands gathered today in Saint Peter’s square, under the warm and beautiful sun of the Roman spring, for the third General Audience of Pope Francesco. As usual, the Pope entrance is followed by him driving through the rows of the devoted, waving and greeting everyone, plus kissing a few babies on the head. It happens every wednesday, and at least a quarter of the audience gathers to attend just this moment, to have a chance to get a look look at the pope, maybe to shout some prayers in his direction.
The big news is that this is not news anymore. Most of the Italian magazines didn’t put any reference to the event on their homepage, today. And even the Catholic magazines, such as Avvenire, put the story on the lower side of their webpage.
After now almost a month of the new pontiff, everything seems to be getting back to “normality”. The traffic was normal even during the General Audience, it didn’t take me half an hour to get into the square due to police controls, and there weren’t any weird flags or handwritten billboards. Pope Francesco acted as a normal Pope as well today, he didn’t come out with any renewing sign or speech. I guess the rock-show is over. It’s good, if after the show come the facts.