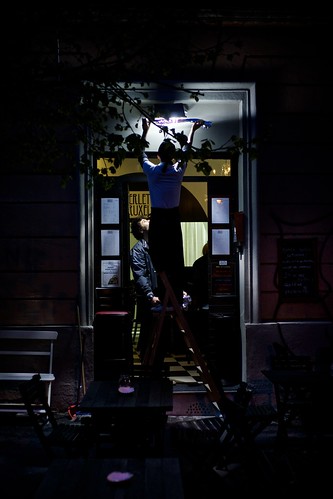 The city of Rome has a long history of neighborhoods being converted from slums to trendy areas. It first happened to Trastevere, which at the beginning of the 80s was still inhabited mostly by crooks and prostitutes. Now it’s probably the most expensive neighborhood in the city. If you are interested in experiencing its origin, you should watch the movie “Ladri di biciclette”, directed by Vittorio De Sica, 1948. Then it was the time of Testaccio, the area that hosted the first council houses of the city and which now is the heart of night life. Then it was the time of Garbatella. This neighborhood, built between the 20s ant the 30s, is the solely pure example of “garden city” produced in the city. It was supposed to be the city harbour and, even if the canal to Ostia was never made, it became dangerous as any other harbor area in European cities. Now it is a cultural neighborhood, quite expensive as you can guess.
In the recent years other areas were transformed in the same way, one example being my neighborhood, Villaggio Olimpico, as I already discussed in several posts of this project. The very last one in time, a neighborhood where the transition is currently ongoing, is Pigneto. Flat owners are seeing almost a daily increase in their apartments’ value. Most of the flats are currently rented to students of the University “La Sapienza”, which, as all the students, are very active at night. So the area is flourishing with pubs, bars, and restaurants. Hanging out at Pigneto, walking around looking for a spot where to have a drink or grab something to eat, is really enjoyable.
So, if you ever happen to be in Rome in the very next future you shouldn’t miss this area, where you can taste the historical transition with some good wine, beer, and food. I suggest you to make a stop at “Merletti di Bruxelles”, a very nice and cozy place serving amazing traditional beer (I’m a beer lover), wine and food. I took this shot in front of the place, while the owner, Niccolò, was fixing the entrance light. He is a very good friend of mine, so if you tell him you have been sent by “Luca the photographer”, you’ll surely have the best service and a discount.