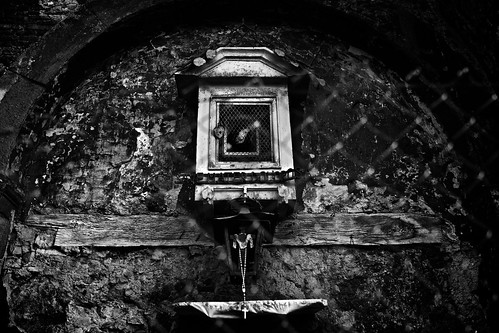 A (Southern)-Western European metropolis and capital city such as Rome should, in theory, represent that secular age the Western World is currently considered to be going through. And it surely is if you look at its citizens, which behave (unfortunately) as crazily as any other “metropolitans”.
However, after this month spent attending major Catholic celebrations and visiting papal basilicas and such, I’m starting to think that this city is not, and probably never will be, really secularized. It’s citizens may be, but not the city, simply because it attracts millions of devoted and pilgrims every year. It is like if a sacred town (and I’m not talking about the Vatican city, here) has been living within the secular metropolis of Rome, with its population made predominantly of pilgrims, which may change every day but never go beyond a five figures number.
And in this sacred, highly-religious town, you may find signs of faith and devotion at any, random corner. Like this “Holy Mary niche”, hanging on what remains of an ancient Roman wall, just behind one of the largest hospitals of the city. Who knows since when it’s there, or when was the last time than someone prayed here, none of this really matters, the point is that the “sacred soul” of Rome is most probably immortal.