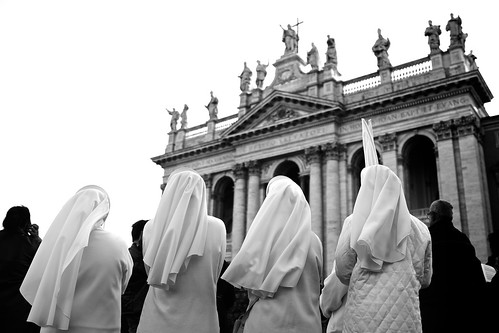 It was a special Sunday for Pope Francesco, today. By finally celebrating the Mass at the most important of the four papal basilicas, the one of San Giovanni in Laterano (Saint John in Lateran), the Pope was formally installed as bishop of Rome, his other major role along with the papacy.
Even if more than one hundred thousand people already gathered in (and around) Saint Peter’s square this morning to attend the Pope during the Angelus, yet other thousands of people reached the basilica of Saint John in Lateran this afternoon, those who could get inside quickly cramping it, while the rest gathered in the large square outside.
This event was much more related with the city of Rome than with the Vatican one, and for once I haven’t seen many tourists, pilgrims, or devoted from around the country. Most of the crowd was coming from the city and its surrounding, and from its churches and convents. In a city which is short to change its major, in a country which has no elected government yet, I think the overall population of citizens is more than glad to finally have an authoritative and yet beloved Bishop and Pope.