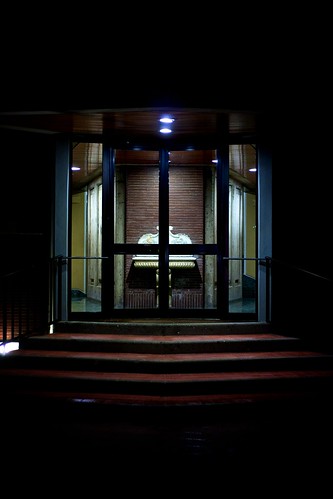 Zombie Day, today. Agata has some minor issues with her skin which keeps her awakening all night long, which means I didn’t sleep. Claudia says I slept much more than she did, so I can’t complain. But still, I spent the day feeling very close to a zombie. I could only walk very slowly, and not much precisely. I had this awful backache, which made me groan most of the time. And obviously I had a tremendous headache, so I could’t stare at bright things such as the sky, or any lights in general, which forced me to keep my head sideways. Which I think is exactly what you would expect from a zombie. You can add that I was in a pretty antisocial mood, and that I could have used some random biting and brain eating to solve few open issues. Then you get me today.
In the afternoon I realized what a short time of autonomy I had left, so I tried to figure out the daily pic. The only thing I could think of, however, was the f-word. I wonder if that’s what zombies think all time long. It would make sense, I guess. Anyway, since that was what all that my mind seemed to be able to produce, and since I am trying to let my mind speak openly within this project, I ended up covering my office wall with yellow notepapers, all with the f-word spelled in large letters. Then I added a few extra notepapers with huge letters spelling YOU and OFF. That was it, I was letting my mind speak openly. A zombie mind. Luckily nobody entered in my office during that time. So I took some shots.
After work I reached the rest of the family at my in-laws, where I showed Claudia the results. She helped me realize that, no matter how zombie-ish I was feeling, I could not post a pic in which, essentially, I was telling you all, well, to fuck off. That would have been indelicate. Or harsh, yeah, I think she said harsh. So, here it is the story of the actual shot, it was taken while leaving my in-laws at the entrance hall of their apartment building. It’s a view I was willing to take since a long time, and the NEX-7 with the color skopar proved once again to be an excellent system for capturing night shots.
Now I can finally eat some brains before going to sleep.