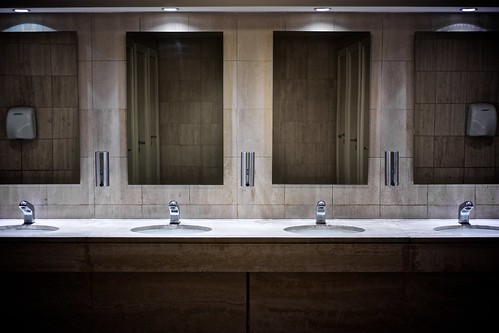 It was the 8th of March when I first introduced my view on non-residential toilets. So that you don’t have to go looking for it, I’ll summarize my thoughts here:
“Non-residential toilets are metaphysical places, where everything is just a metaphor of the unspeakable.”
That time I shot a metaphysic self-portrait in my office’s toilets. Today I did the same. But I’m not at work. And I’m not visible (though, I can assure you, I am IN the picture).
As anticipated in the very last posts, every day after work I’m having a walk at the Auditorium of Rome. As with any place of magnificent architecture, the toilets at the Auditorium are obviously gorgeous, but also uneasy. I mean, nobody really feels fine at pissing on super-design architecture, do they? Let alone dropping a number two, that would be so unseemly that most people would just hurry to take their duties at home, or at any other place with a toilet, just to avoid the superior disgrace of browning anything in the magnificent design toilets.
I think all this does not happen by chance, but that there is a clear plot in designing ill-at-ease toilets. They want to convey a subtle message. They want to remind you that you are not supposed to be in that toilet, because nobody is really supposed to. They had to put it there due to regulations but, come one, in places such as this you are supposed to be a superior version of the human being. The remaining part of us, the one that releases uncanny and smelly fluids and solids, that should’n exist in the first place, but at least should be made invisible while we are here. We should not leave any sign of your presence.
At the least, we should try to avoid to reflect on mirrors.