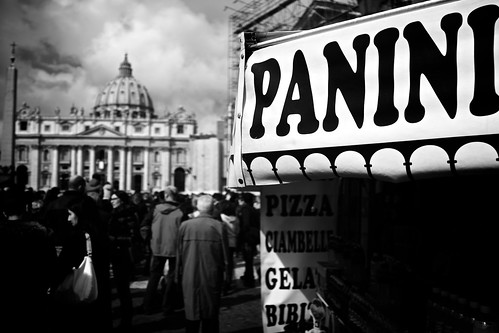 More than a million of people between devoted, pilgrims, tourists and curious have visited Saint Peter’s square in the last twenty days. It is an enormous number (higher than the whole population in the city of Amsterdam, just to make an example) which, besides flooding the city and slowing an already sloppy car traffic, nourishes the whole touristic business.
Among the many tourists amenities, the ugliest and most invasive are probably the “Panini stalls”. They are now part of the landscape of any major touristic attraction: the Colosseum, the Foro Imperiale, Castel Sant’Angelo, and, obviously, Saint Peter’s basilica. Around the latter, since the beginning of the papal election, the number of these stalls have sensibly increased. They (usually) serve terrible and overpriced sandwiches, beverages, sweets, and ice-creams. Don’t get me wrong, the food there is totally safe, the problem is that it is basically tasteless, low-level-industrial, and all-but-Italian. These stalls, together with the cheap-stuff souvenir shops, are the things which transforms our majestic historical beauties into plain tourist attractions.