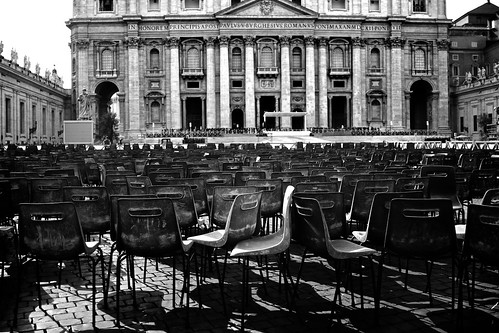 For the “open air Mess” of the pontiff inauguration of the last 18th of March, the whole Saint Peter’s square has been set up so to allow the crowd to stay safely and neatly. Two huge areas have even been filled with chairs for the (many) important guests.
Now, usually these set-ups get removed shortly after the event, and the square goes back in looking all wide and empty (besides for the tourists). But not this time. Between the traditional celebrations which follow the pontiff inauguration, and the the ones of the Holy Week of Easter, the Vatican must have decided that assembling and disassembling this whole set-up on a mostly daily base wasn’t much of a clever idea, and decided to leave it there, despite the burden it makes to visit the square (which looks more like a labyrinth now).
Frankly, I think I may prefer the set-up square to the beautifully empty one, simply because I see it as a sign of how lively and welcoming this place has suddenly become since the election of Pope Francesco. These seats tell me that an event has just ended and another is going to start soon, and that for both this place has been and will be flooded with people, all feeling the urge to be present in flesh and blood to what they see as a crucial moment in the history of the Western society.