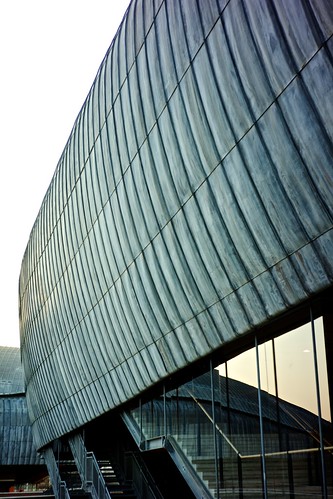 Last weekend DST (Daylight Saving Time) came in. It didn’t make much of a difference on Sunday, but today it gave me a luminous evening when I left work. Sunset was just at its very beginning, and Claudia invited me to have a walk at the gardens behind “Auditorium Parco della Musica”.
Besides the peculiar apartment buildings built in 1960 for the Olympic Games, my neighborhood Villaggio Olimpico has another landmark, which is the Auditorium. Sure you can wiki-google it, if you bother, but since most of you probably won’t, here are a few facts good to know. The Auditorium was designed and built by the Italian Architect Renzo Piano, the most productive architect in Italy and one of the most famous architects in the world (in 2006 TIME included him among the 100 most influent living people). The three concert halls are supposed to be shaped as beetles, more as alien space-ships if you ask me. Wether they look good or not is still quite controversial among Romans, but to me they simply look cool. Last but not least, it had a huge impact on the neighborhood, quickly transforming what was a “periphery within the city-center”, a strange case of a poor and abandoned area considered by most to be dangerous whilst surrounded by the most expensive and posh areas in Rome, into a safe, quiet, and affordable neighborhood populated by elder residents and wellborn boys and girls moving out from their parents.
It was a drastic change, and as any drastic change it got someone crushed (like those who could not afford to redeem their apartment and so were kicked out and could find another rent with the same price only very far from the city center) and someone enriched (like the banks who bought those apartments and resold them on the market at ten times their original price), but all the others, the majority, got a decent and safe neighborhood with plenty of cultural events, an incredible Auditorium and a some nice gardens behind it.