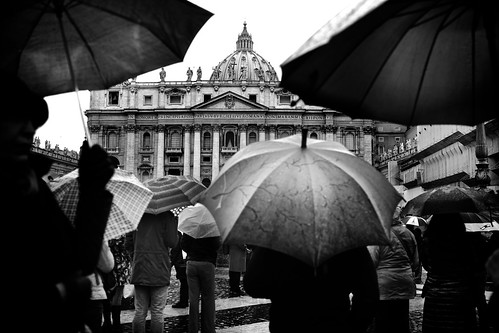 Weather talking, this has been a really shitty March here in Rome. We’ve got a few glimpses of Spring, with days at twenty celsius degrees, but for the rest of the month it basically rained the whole time. This is not a rainy city, and its citizens aren’t exactly used to rain (we tend to postpone our duties on rainy days, since it – usually – never rains for two days in a row). All this to say that if it wasn’t for the “Habemus Papam” theme to keep me out on the streets around the Vatican, I would have probably spent these days at the warmth and coziness of my studio-apartment.
And instead here I am, among all these umbrellas, waiting with other hundreds of people in Saint Peter’s square, while Pope Francesco is inside celebrating the “Messa Crismale”, a special Mass for which I couldn’t find any english translation. Crisma is the sacred, perfumed oil that is used at Baptisms, Confirmations, and whenever someone is Ordained. The oil can be consecrated solely by the Bishops and once a year, in the Saint Thursday that precedes Easter. Since the Pope is the Bishop of Rome, today he celebrated the Mass and consecrated the Crisma in front of the whole Roman clergy, gathered inside Saint Peter’s basilica for this important (and the first for Pope Francesco) celebration.
The Pope (which actually keeps addressing himself as the Bishop of Rome instead of as the Pope…) will go afterwards to the youth detention center of Casal del Marmo to celebrate the other traditional Mass of the day, the “In coena Domini”, during which he’ll wash and oil the feet of twelve young convicts (one of which should be a girl, something that never happened before).
Sure enough the Pope keeps sending to the world the right signals of a new humble and simple Catholic church, and the world in turn keeps answering with tons of people coming to the city and gathering in Saint Peter’s square, no matter what the weather looks like.