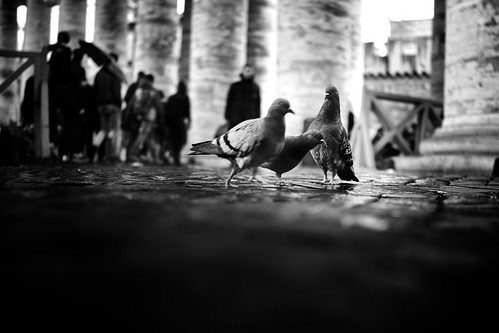 Pigeons are probably the happiest living beings on this world every time a new Pope is elected. The thing is, the tons of pilgrims, tourists, and Romans (devoted or just curious) bring tons of food along, lots of (crumbs of) which is left behind. So many crumbs, every day, all day long, for weeks in a row. Just for them. So, you see, to the Roman pigeon community the “Habemus Papam” is probably the miracle they tell their sons about, the legend of the never ending food at Saint Peter’s square.
This whole thing would be fun, even kind of poetic, if it wasn’t that these animals are amongst the most vermin we have in Rome. Wikipedia informs me that the city pigeons are called feral pigeons, and not “rats with wings”, as we friendly refer to them.
Now, even if a feral pigeon brings as many diseases and is as much infectious as a rat, I still think they are very far from being (perceived as) equally disgusting. Try this exercise: imagine Saint Peter’s square invaded by hundreds of rats, gathering wherever someone is eating a sandwich, founding shelter under the columns, with kids chasing them for fun.
Now take a look at the face you’re doing, and tell me you’d do the same for “just” a bunch of pigeons.