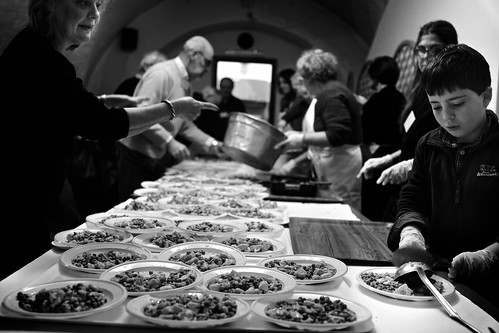 Palm Sunday, the beginning of the Holy Week, when blessed palm branches (but more often olive branches here in Italy) are brought home by the devoted, has been today celebrated with the second Angelus of Pope Francesco at Saint Peter’s basilica. Lots of devoted gathered again in Saint Peter’s square, where olive trees have been planted for the occasion. Peach trees in bloom were planted too, as a sign of the upcoming spring.
However, I got quite bored of Saint Peter’s shots. The “Habemus Papam” shouldn’t just be about the new Pope and all the people that gather every sunday to hear his words. As a Roman, I feel it should also be about what it means to have the Pope and the Vatican city in our city (which for most of us is both a blessing and a burden).
So I went to one of the more than four hundred churches of the city (you read well, four hundred just in one city), Santa Lucia del Gonfalone. I happen to know the dean, Padre Franco Incampo, since I was a little boy. Now, Padre Franco is one of those real priests, super-active in making his church a place for good deeds and better understanding of the religion. He’s the face of the good church, the one we tend to forget every time a new scandal hits the Vatican (which is happening at a worrying pace since a few years).
One of the charitable activities of Padre Franco put on at Santa Lucia del Gonfalone is a soup kitchen than serves one hundred and twenty lunches every Sunday. It is operated entirely by volunteers, while Padre Franco has his lunch together with the “hosts” so to share the food, to listen to their stories, and to give a word or two of encouragement.
Fact is, while I could find the number of churches in Rome, I can’t happen to find the number of soup kitchens. This is probably due to the fact that, besides the eighteen, daily working, official soup kitchens I could find on the internet, there are still a lot of other weekly, spontaneous, volunteers-organized, church-hosted, soul kitchens which just don’t appear on the web, but are very well known but those who need them.
Habemus Papam doesn’t just mean we can get olive branches blessed by the Pope himself, but also (and mostly) that we live in a city where the presence of the Catholic church is capillary at its highest level, which sometimes is a burden, but many other times is a blessing, especially for the needy.