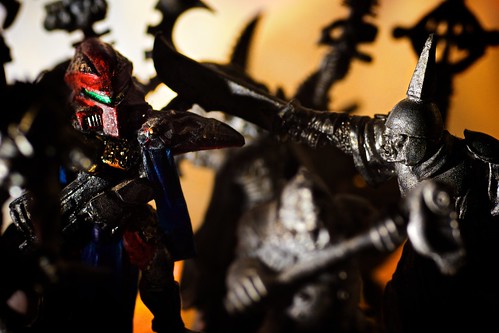 Today I bumped into a couple of boxes which I brought to this house when we first moved in, I think it was 2004. I moved in from my parents’ house, hence from my former youth, and those boxes did the same. One was full of photos from my early 20s, hence ex-girlfriends and best friends, all of them ridiculously young. Lots of pics about snowboard, we did a lot of that. All those pics tell the story of a nice and young guy with nice and young friends, which had no idea he was so close from meeting with his future wife at Capoeira lessons. It happened really fast.
The other box, instead, was full of metal figurines. The kind of figurines used during role playing game (RPG) sessions to describe battles. When I was teenager I was a lot about RPGs. I clearly remember spending my afternoons placing those figurines to simulate the epic battles happening in my mind. Battles happening in fantasy fields were all epic, for the very simple reason that they were fought by the good guys against orders of ugly and creepy monsters. In such a situation, good guys can be as rough and gruesome they want on monsters, setting them on fire, dismembering them with a giant axe or a chainsaw, running over them with huge horses or tanks, and any other disturbing and ultra-violent ways of killing or severely injuring the enemy were allowed.
Fantasy battles allow you to imagine the scariest monsters and situations and then solve them with bullets or broadswords. Heroes are here for that. I knew that from my other favorite activities: reading comic books (at least four or five a week) and playing video-games. I must have spent a fortune on all these things, they kept me company and made me dream about those battles, and wars, and sometimes super sexy heroines (but mostly about dragons, magician, and cyborgs). If you are wondering, the answer is clearly yes, I didn’t get laid much till I cut all that crap.