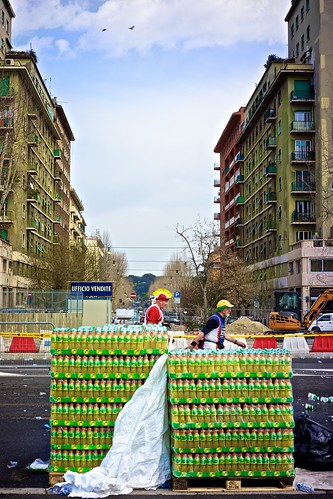 Km 29th of the Rome City Marathon passes at the corner of my street. This morning, after the usual waking-posting-washing-dressing process, while having the Sunday’s family walk with the toddler and the dog, we “run” into the Marathon. City marathons are one of those things the aliens spying on us are still trying to figure out. All those “normal” people gathering from all around the world in the same city, all prone to perform what probably is the most epic and pointless gesture ever. OK, maybe some of the guys and girls did get laid because they ran at the marathon, but seriously, those martians looking at us must be seriously puzzled.
There are literally people of “all races, sex, and ages” participating at these events. I saw an old Japanese woman so gracile you wouldn’t believe she could run at all, and then a huge American, must have been 160 Kg, his belly ridiculously big as his calves. And they were at km 29. So they were in much better shape than I am since at least ten years. I’m in worse shape than an American super-belly-sized guy and an muscle-less tiny Japanese grandmother. That’s bad news.