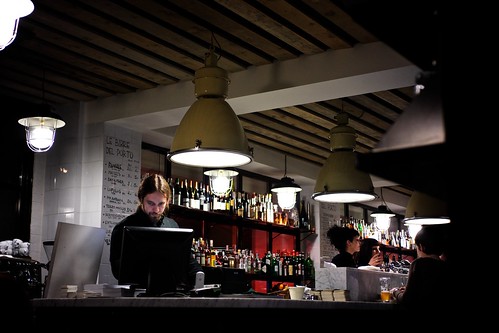 The counter of Porto Fluviale, currently the trendiest bar in the South of Rome. Agata is home with the nanny, and Claudia and I are totally drunk, celebrating ten years since we are together…
Our wedding anniversary is the 29th of June, a which is “San Pietro e Paolo”, a public holiday in Rome. Which means that, since we turned into the wedding photography business, we haven’t be able to celebrate our anniversary anymore because we are usually shooting someone else’s wedding. So, we decided to move back and to start celebrating the day we started dating instead.
Now, technically we had our first kiss in the night of the fourth of February. Claudia and I met the previous September at Capoeira, the Brazilian martial art that looks like a dance, and the evening of the forth of February, after the lesson, she invited me for dinner at her (parent’s) place. It wasn’t the first time, we were hanging out together quite a lot in the last few months, but in the very last few weeks our relationship had changed drastically into an unexpected direction. It isn’t easy when a friendship moves a step forward, because everyone is afraid of what can be lost, sometimes more than excited of what can be gained. But that night it eventually happened, we kissed, and then I had to return to my (parent’s) place. So, you see, the official anniversary should be on the fourth of February.
However, it is my opinion that the you should count as the day you start being with someone who was a good friend not the day you kissed each other for the first time, but the morning after, when you wake up. Because that morning you can have two different urges:
1) to see that person as soon as possible, because something magic and beautiful and precious and incredible had just happened and you don’t want to waste any second of your life anymore without being with that very specific person; or
2) to switch off your mobile phone and fly far far away, because you just did a terrible mistake and you have no idea on how to communicate the news to the other person.
So, again, you see, to me the official anniversary for Claudia and I is today, because I didn’t wake up wanting to evaporate, but I woke up feeling more awake and alive than ever. And this is what I am celebrating tonight. And this is why I got totally drunk with the excellent drinks served here at Porto Fluviale.