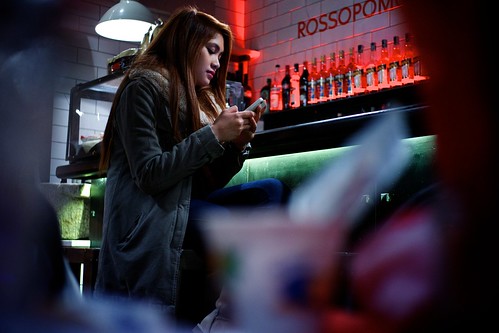 I don’t know if she was Asian or American, she spoke the few words she had to in a shaky Italian from which I couldn’t get any clear accent. Anyway, she was a beautiful and foreigner girl which ordered three take-away pizzas at the Rosso Pomodoro of Largo Argentina, city center, tonight. If you are a nice looking girl and ever visited Rome you know what happens when you walk in, all alone, any restaurant, or shop, or bus, or mostly anything anywhere: you get immediately chatted up by one or more smily guys…
So, I was having an Aperol Spritz with Claudia, feeding Agata some yogurt in the meantime, after our Sunday afternoon shopping in the city center, when this girl stepped in. Two out of three bartenders reacted so promptly and vigorously that the girl couldn’t avoid the approach. And the fact that she had to wait for the pizzas to be cooked didn’t help her at all. In the meantime, one of the two bartenders had won some secret “who-gets-to-talk-with-the-girl” competition, because the other left the counter in clear disappointment. The remaining guy tried so hard to get into any kind of conversation, bothering the girl with the silliest questions (like, he asked how did she like the pizza cooked, as if she could really have chosen between rare, medium, or well done!), until he was eventually shut-up by the boss. With great relief of the girl, who wisely started texting on her mobile, to avoid any further eye contact with the crew.
Girls of all over the world, this is Italy, but trust me when I say that not all the Italian guys act this way… well, not me, at least 🙂