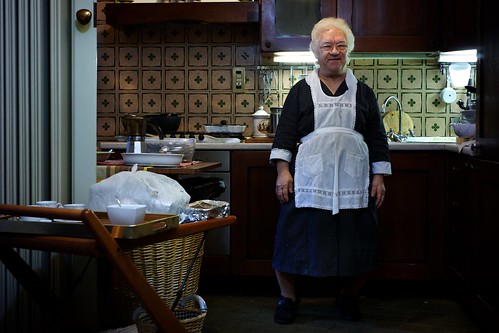 She’s Tata, which in Italian stays for nanny, her real name is Maria and her past is a mystery to me, so I won’t even try to picture it. What I know is that she was just a girl when she moved from a very poor area of the country to my aunt Orsola’s (one of my father’s older sisters) and her husband’s place in Rome, and that here she has remained since then. Working as maid and nanny in the house, when Orsola’s three kids grew and left the place, Tata started helping my grandmother too. First at her place, then eventually my grandmother had to leave her home and move here at Orsola’s, where she spent the last years of her life and, on a sunny day of June 2003, at the age of ninety-three, she passed away in her bed, in her room.
Tata is part of the family, no one would ever object that, and, together with aunt Orsola, she’s the sole custodian of my grandmother recipes. With four daughters and two sons, who then gave birth to a total of twelve grandchildren, my grandmother had a wide audience which enjoyed every single lunch and dinner she served in her life. I used to pay her a visit almost every Sunday afternoon, for example, and I now happen to miss her and her lunches as they where one sole thing.
Today would have been her birthday, if she hadn’t died ten years ago, so aunt Orsola had the fantastic idea to organize a big lunch for the whole family to enjoy once again all her recipes. Since my grandmother died we don’t hang out very much, me, my cousins and my uncles/aunts, if it wasn’t for Christmas and another couple of yearly occasions we would probably fade out from each others’ lives. So, ideas like this are the inestimable glue that keeps us together.
And here, in this kitchen, where I enjoyed the lunches with my grandmother in the last years of her life, during which I would tell her about my life, my studies, my girlfriends, my struggles, here, once again, Tata Maria and aunt Orsola cooked the same excellent food, making it taste the same since ever, at least since each and everyone at this party was born. And that is really a long time.