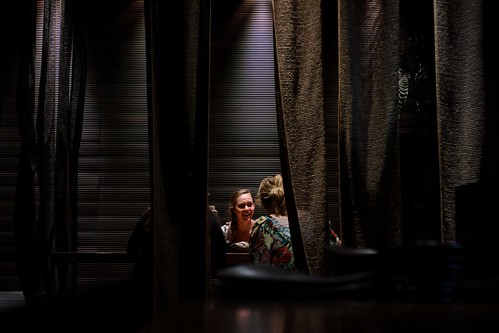 A group of American girls enjoying their sushi dinner at Somo, the fanciest Japanese restaurant in the city. The place is located in Trastevere, an area which is densely populated by foreigners, especially Americans, so this is all but an uncommon scene. What was uncommon, to me, is the restaurant, firstly because this was the very first time I’ve been there, secondly because the place is astonishingly beautiful and fancy, at a level really difficult to find in Rome. Nothing is cheap at Somo, not the ambience, not the furniture, not the service, not the drinks, not the food, and surely not the bill.
Yeah, it’s expensive but we deserved to celebrate. This has been a really busy and complicated week and we managed to get through it without any “major loss”. Even better, today, at ten days from the end of the 365(+1) Days of NEX-7 project, I’ve at last finalized the next project. I will unveil it next week, as soon as I’ve fixed a couple of missing things, but I can already say that the most is done, and I’m really excited…
Bottom line, if you are up for a good sushi in a charming and fancy place in the city of Rome, look no further, go to Somo and enjoy the evening. They also serve “fusion” food, very asiatic stuff, but I focused on sushi tonight and haven’t tried anything else, so I can’t tell how good that is, but I got the idea that every dish must be pretty awesome.