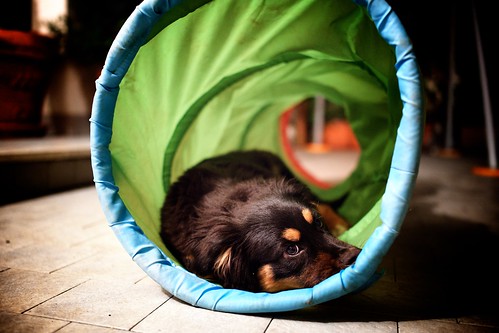 I’m click training Ombra since a couple of weeks. It is my first time with this kind of training, and so it is for Ombra. My previous dogs were raised at my parents’, where my mother had always played the role of the dog-expert (since she had dogs during all her youth), so all my previous dogs were (un)trained using her approach.
When we got Ombra I realised I didn’t know much about training, besides maybe how to teach a puppy where’s Ok to pee. Together with this enlightenment it came the decision to proper train the one dog which was going to be our family dog. I started by reading a couple of books about Australian Shepherd dogs, and in one of them I came across the concept of click-training. I guess my scientific background kicked in as soon as I got the Pavlovian concept behind the clicker training approach, and the idea of deconstructing and shaping behaviours seemed just too interesting not to give it a try. A couple of days later I bought a clicker and started the training.
The good thing is that Ombra is such a smart dog that training is always easy and highly rewarding. Take today. I unfolded Agata’s Ikea-tube and it took me less than six clicks (and treats) to teach Ombra how to crawl inside the tube from one end to the other. After other four clicks Ombra would run into the tube and make it to the other side in less than a second. And even after we stopped training (and treating) she kept playing with the tube and showing me how much she enjoyed being inside it.
This is the first behaviour I shape from scratch, and I’m pretty impressed by the way Ombra answered the call and nailed the training. Agata was impressed too, and she kept clapping at Ombra every time she would run into the tube.