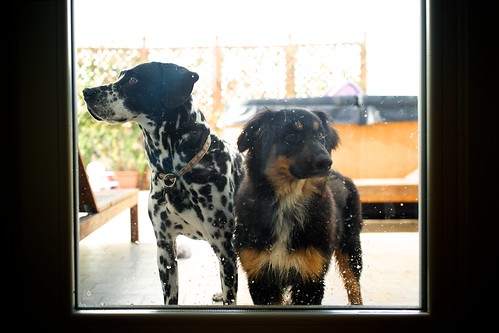 “Where’s my master?!?!?”
Ombra waits outside, closed in the terrace together with my father’s dog Snoopy, son of my old dog Lucy. Lucy was a dalmatian which during the summer of 2006, while Claudia and I were getting married, managed to run from our summer house for a few hours, during which she mated with one of the bastard dogs in the neighbourhood. Luckily (for us) she decided for the most dalmatian-ish looking dog, a weird looking white dog with a few black spots. The puppies came out all looking nice and all found a family. My parents kept one of the four puppies and named him Snoopy. Since Snoopy arrived when I moved to the Netherlands with Claudia and my sister left my parents’ home to finish her studies in Architecture in Spain, the dog became a new son to my father and they have a particularly deep bond ever since.
For example today my father left me Snoopy for a while, and the dog spent the whole time watching through the windows of the terrace looking for his master. Ombra tried to push him to play for a while, then somehow got sucked into his paranoia and started looking inside as well.