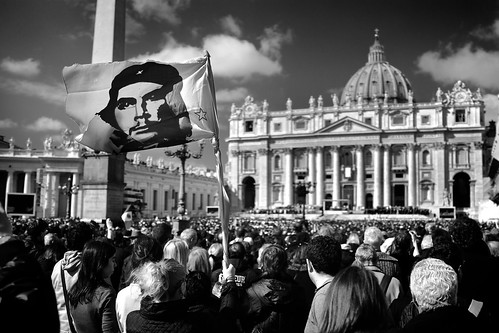 Will Francesco be the South American Revolutionary Pope the world hopes so much for? It’s still too early to say, but sure the people all but hide their hopes.
San Pietro got crowded again, today, for the official inauguration of the 266th pontiff, the one of Pope Francesco. The tradition wants a long mass, held on the square, just in front of the cathedral, so that the whole crowd (and now the whole world) can attend it. During the celebration, the new Pope receives the official symbols of his papacy: a lamb’s wool shawl, to represent his role as “the good shepherd,” and the Fisherman’s Ring, to represent his role of spreading the gospel. Pope Francesco wanted a second-hand ring, not in gold (like of his predecessors), again reflecting his humility and simplicity.
One hundred and thirty delegations from all around the globe together with (more or less) two hundred thousand people attended the celebration in Piazza San Pietro.
Rome, as you may imagine, was almost completely paralyzed by the event. A big part of the city center was closed to traffic, and a massive deployment of police all around the Vatican City secured the area. I probably never saw so much police in my whole life.