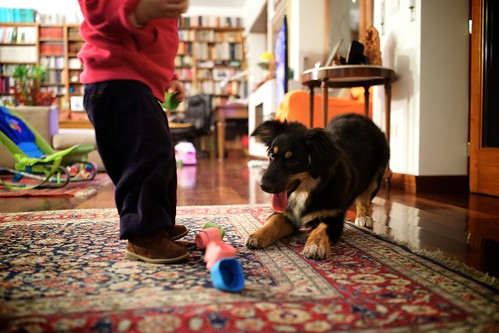 Tonight I had the chance to bring Ombra to my parents so to she could start getting used to their apartment and reinforce their connection to her (our) “pack”. Ombra loved the place, especially because my parents live with one of my old dog Lucy’s four sons, Snoopy. He’s all but a puppy (Lucy delivered during the Summer of 2006, a month after Claudia and I got married, shortly after Italy won the football World Cup, and just two days before Claudia and I would move to the Netherlands), so he’s not very playful, but still Ombra is playful enough for two, so the relationship works.
Tonight, however, Ombra found that Agata is good to play action games with too. And Agata found that Ombra isn’t just fun to hug. In the last two weeks I trained Ombra to catch and bring back things I would throw in the terrace, and tonight she perfectly applied the behaviour while playing with Agata. It was a lot of fun to watch, plus it got me thinking that may be we found a way to discharge both our “puppies” energies without having to get personally exhausted…