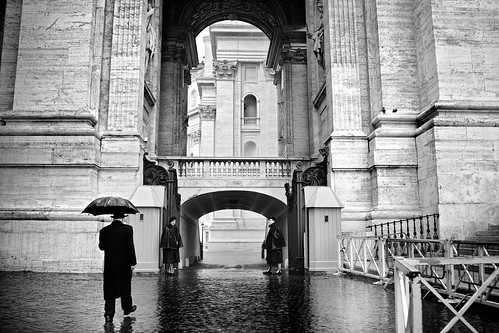 The City of Vatican, the (last in Europe) absolute elective monarchy, obviously non-hereditary, in which the Pope exercises full legislative, executive, and judicial power. For most of the Romans it could be summed up in a long, tall, wall which encloses a whole slice of our city, which we are never given to cross (and God knows how convenient it would be instead of circumnavigating the whole perimeter of the Vatican whenever we have to move from two opposite points in the city).
Fact is, Romans, as any Italians, foreigners, visitors, tourists, etc., are not permitted to walk or drive inside Vatican City without specific permission, which is normally granted only to those who have business with some office in the Vatican. For example, I just once was granted the permission to get in (and solely in a very narrow area) the day I got the religious Catholic confirmation.
I had the ceremony in one of the halls inside Saint Peter’s cathedral, so I was given the permission to drive into the Vatican City so I could park the car and skip the long line of tourists everyday crowding the public and main access to the cathedral. That day I drove through this very same gate, through the Pontifical Swiss guards, and immediately after I was gifted with an unexpectedly different view of Saint Peter. Beyond the gate there were other Swiss guards and a few priests. That’s all I first-hand know about the Vatican City. Not much, I agree.