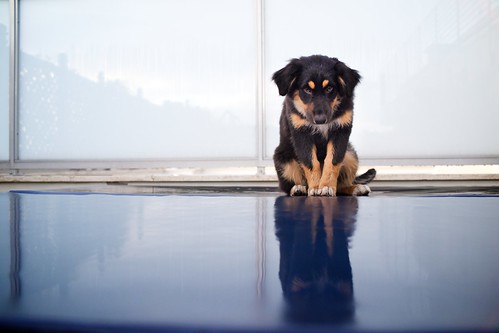 Here’s Ombra, the Italian word for Shadow. Let’s start from the name.
I’m a big fan of George R.R. Martin’s “A Song of Ice and Fire” books and of its TV series version, “A Game of Thrones”, which means I’m deeply in love with the Stark’s direwolves, and, among those, Snow and Shadow are certainly the most fascinating. However, Ombra wasn’t called such after the direwolf.
I’m a big fan of low light photography, and most of the times I spend more time and energy into getting “the right shadows” in my photos than into anything else. Yet, Ombra wasn’t called such after my love for photography.
The dog before Ombra, the female Dalmatian with which I spent the last fifteen years, was called Lucy, which sounds almost like Luce, which means light. But again, Ombra wasn’t called such because coming after Lucy.
First of all the name Ombra wasn’t given by either me or any of my family members. It was how the girl who showed us the puppy used to call her. And she isn’t a fan of direwolves, of low light photography, nor she has another dog which is called Luce. She simply used to call this puppy Ombra because she’s all black on her back, so she’s quite dark when she moves around. Like a dark shadow.
It happened that Agata liked the name when she heard it from this girl, and kept calling the puppy Ombra. I had a long list of possible names in my head which I had to let go, one after another, after seeing that there were no chances to change it anymore. Later, only quite later, I realised that Ombra wasn’t quite a bad name for all the reasons I listed before.
Plus, now that Ombra is with us since a whole week, I have to admit that she really moves as if she were my shadow, she’s always beside me wherever I go, and sits at my feet whenever I stop. She’s my shadow, I love shadows, and Shadow was the fiercest direwolf ever. So be it, please meet Ombra.