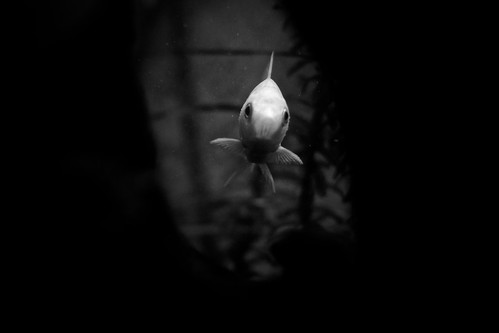 When I was a teenager I used to feel like me and all the people around were some kind of fishes in a tank. All so busy in living the “real” life, like fishes are busy swimming like they where in the sea, hardly noticing that the tank is no sea in any way. I always had the impression that the people were busy in keeping themselves busy just to avoid noticing how small and depressing the tank, and how far and different the sea, really were.
With the years the feeling did never fade away, but it changed a lot. When I was in the university, for example, I felt I was the passenger of train railing through the world, through the people, through life. I wasn’t much more than an observer. If the aquarium was still there, then I was diving in a submarine.
When eventually I met Claudia, the feeling changed again. I wasn’t alone in the train (or submarine that it was) anymore. I had company, someone to look at the world with. Then she slowly convinced me to get out, here and there, and embrace the life the other fish were having and, apparently, enjoying. This is (part of) the story of how I became a productive member of our society.
I’m still convinced that what we are living in this world is just a miniature representation of Reality, and I’m mostly fine with that, I keep observing (and taking shots, here and there), but I do it from shorter and shorter distance. Hoping to get the moment in which everything will be teared apart and the truth revealed. That would be cool to get a shot of.