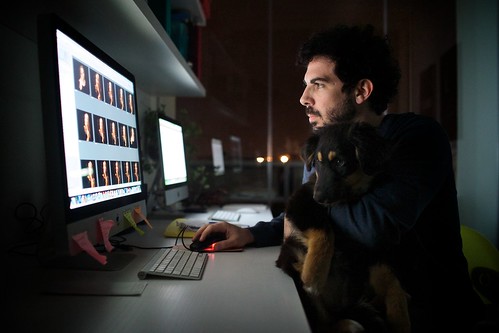 Here we are. Today I begin the twelfth and last theme of the “365 Days of RX1: one camera, one lens, twelve projects”. It has been a long voyage, especially since it started right at the very end of my previous and first 365 project: “365(+1) Days of NEX-7”. It’s almost two years that I have this daily appointment!
Now, I had several ideas on how to procede for the last theme, most of which related with the concept of “end”. However I’m not very good with farewells. So I guess I couldn’t have never really done any theme about the end, to end this 365.
For as many ideas I may have had, I ended up not having much choice anyway. For various reasons, which I’ll be explaining in the next days, our life, our home, and our agenda has been suddenly revolutionised by this new family member. She’s Ombra (lit. shadow), a four months old tricolour black Australian Shepherd female. She arrived last week, and as you may know if you ever had a dog, I’ll have to spend the next few weeks dog-sitting her all the time I can. Because she has to adapt to her new environment (our environment), because she has to learn how to behave with her new family (us), and because she has to be trained to behave as a good citizen dog and she needs the training right now.
So, basically, besides work and parenthood, my remaining (little) free time will have to be entirely devoted to Ombra and her training (and a bit of family training too, since Claudia met my dog Lucy when the latter was already five years old and well trained, so she doesn’t know how to cope with puppies, let alone Agata, which is two and doesn’t know much of anything). Hence, my last theme got somehow forced due to lack of free time. In “Meet Shadow” I’ll be looking at the effects of the introduction of Ombra on my family, and at the ways we will bond together in the next, crucial, thirty days.
So, here she is keeping me company during a session of nightly post-production. Welcome to “Meet Shadow”.